Chalara disease also known as Ash dieback  was first reported officially in the immediate area surrounding Old Oak Barn in 2015. Today there is a very wide range of healthy trees in the woods.  Sadly we, like many woodland owners, are now dealing with what will almost certainly turn out to be a significant tree disease of this century - Ash Dieback.  Hymenoscyphus fraxineus is an Ascomycete fungus that causes ash dieback, a chronic fungal disease of ash trees in Europe characterised by leaf loss and crown dieback in infected trees. This winter we have begun taking out infected trees many of which we planted here in 1998. Initially they grew very well but in the last two or three years it has become obvious they are diseased. Infact there is hardly a single Ash tree in this part of the world that is not affected. The picture below shows some of the felled ash in March 2018. 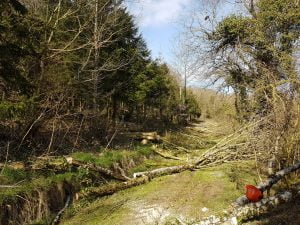 You can read more about this threatening disease called Ashdieback.

What other trees grow in Cwmpalis Woods?

The woods here are predominantly hardwood. It was almost certainly clearfelled during the first world war 1914-1918 so there are very few trees which are over 100 years old. Subsequent plantings have been undertaken in 1998 and in 2005 covering approximately 5 to 6 acres in total. They have been very sensitively managed since we arrived here in 1988 and indeed one of the main factors in helping us decide to buy the farm was the presence of the lovely 40 acre Semi Natural Ancient Woodland. It is quite a landmark in the locality and is easily visible from the A40 as you begin to drop down into St Clears from the east. We are fortunate to have  mainly south facing land. The woods of course are managed under strict National Assembly for Wales regulations with licenses running and sometimes work is undertaken under specific grant aided schemes.

We encourage all our visitors to wander in the woods on the many woodland trails and weather permitting we offer a 4 by 4 trip in the truck also which is very popular. However this winter has been one of the wettest on record and the land is far too wet still to go far around the circuit.

This photo below shows Old Oak Barn in the foreground with the main woods clearly visible behind. 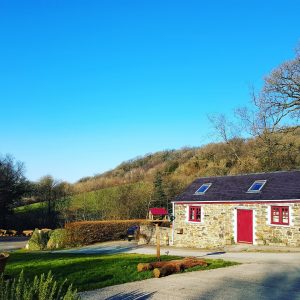